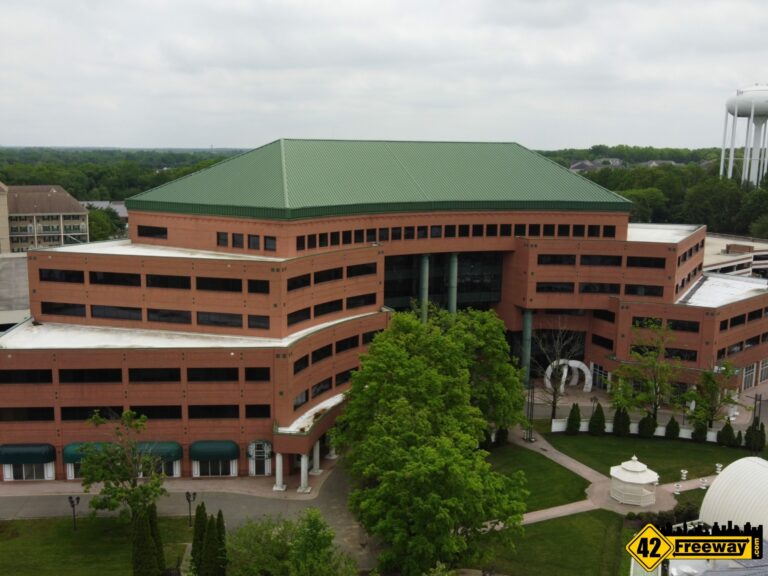 The large centerpiece commercial building Plaza 1000 at Voorhees’ troubled Main Street development could face the wrecking ball, if the plan coming before the Planning Board is approved.

In its place… 280 luxury apartments are planned in three new buildings, four stories each.

To be clear, this plan is targeted only at the large six story brick façade commercial building. Everything else in the extended Main Street complex will remain.

And yes, the old Main Street pedestrian area which was touted as the cornerstone of the development when it was built decades ago will still be there… but hopefully improved over time with this new influx of residents.

This proposal also calls for splitting the property into separate lots, presumably so that the larger individual businesses in the outlying buildings could purchase their properties. We’ll lean more on this at the Planning meeting

The Voorhees Township Planning Meeting will be a Zoom meeting and is scheduled for May 25th at 7pm.

A New Plan For A Troubled Development

Opened in 1988, the Main Street complex in Voorhees opened with concerns of not being enough… because it was expected to be so popular! Anticipated was a high demand for the stores and residences that were still being developed.

The next phase of apartments had a waiting list of 800 potential tenants.

Within two years under one liquor license, multiple bars and restaurants opened and were thriving. Main Street Pub, Gina Rosa’s Restaurant, M Street as well as the catering hall… and according to a Courier Post opinion piece at the time, two more bars were planned.

And a 12 screen movie theater was planned to join in on the success, but was then not approved by the town.

To say the future of Main Street looked bright was an understatement. It was primed to be a hub for Voorhees and South Jersey.

But soon things were not well with the manufactured small town shopping district.

Well timing wasn’t great as in the early 1990s as the US entered a recession.

And since Main Street opened with many luxury retailers… when a recession hits the luxury purchases stop, and stores closed.

Despite all the early promise, retailers started failing somewhat quickly and it only took a few years for ownership to start changing direction for the retail spaces.

The retailers started changing into office space and just 4 years in, most of the retail spaces were offices. Well except for the bars and restaurants.

And soon most of the offices and restaurants were gone also. Today there are no bars on Main Street Voorhees.

Just five short years after opening, major media was calling it a failure.

The article closes with a defeatist quote from developer Canuso. “I wanted a town”

Like many of the real old town American Main Streets… Main Street Voorhees is mostly deserted today. But at least the real main streets are coming back to life around the area. Collingswood, Pitman, Haddonfield.

And the hope of the current owners is that by removing the large commercial building and replacing it with additional luxury housing, they will restore life to their Disney-fied version of Main Street.

The documents provided as part of the Planning Board package include numerous site plans and renderings.

Kudos to Voorhees for making these available to the public.

As mentioned, they plan to build three new buildings of four stories each.

Several of the apartments have balcony spaces, but it seems most don’t.

The style is that modern urban tech look that is popular in cities these days, although the Main Street project will be a softer touch in that design element.

Pictured are common areas between the buildings for residents.

There are a mixture of 1 and 2 bedroom apartments, some also including a den.

It’s not clear if any of the units need to be designated as affordable housing, as is typically the case with residential developments.

Meeting will be conducted virtually via Zoom.

To participate in the meeting via video conference, log onto: https://us02web.zoom.us/webinar/register/WN_TbhGogBjTTu_uRXkZ3JDiw and follow the instructions on the screen. The meeting ID is 860 6181 9529

Check the Voorhees Planning Board Website for additional details or questions