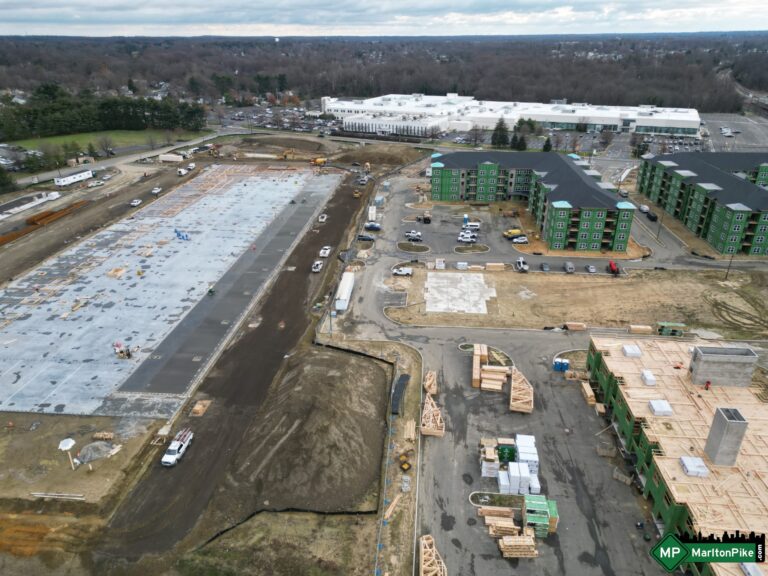 The Enclave at Woodcrest Station just recently made that name official, and just last week created a Facebook page which you can “Like” to follow along for latest information from them.

MarltonPike.com made a visit last week and took some drone images of the projects. Considering their location going somewhat further back off the road, well the drone images will make it clearer to readers and residents of the development statuses on the projects.

First, as a quick “bring-you-up-to-speed” commentary on the two Woodcrest area projects and how they came to be, I offer this introductory section first.

The project area is Northeast of the Woodcrest Patco Train Station, which is a key transportation route for many South Jersey towns heading into Philadelphia’s Center City commercial district.

The land for the two projects comes from the former Victory Refrigeration property which was a 230,000 square foot facility that was demolished in 2016.

The original Cherry Hill Township redevelopment plan from 2018 looked to take advantage of the proximity to the popular Woodcrest Patco train station, envisioning the full property to be developed with a mixture of residential, office, shops and retail.

Essentially the core plan was envisioned as a “Transit Village” concept, which is a dream development touted by towns for areas around most train/transportation stations.

For redevelopment purposes the property was split into two areas “Victory West and East”.

The West segment was planned to be a large residential project sitting closest to the Patco train station, and the East segment was earmarked for commercial development (offices, shops, hotels, entertainment and restaurants).

Local streets were expected to connect the residents on the West side to the shops and restaurants on the East.

In that same 2018 redevelopment plan it clearly listed Industrial/Warehouses as prohibited for both sections of the Victory property.

But soon after that initial redevelopment plan was created, the world was impacted by a global pandemic.

While the residential portion for West segment proceeded on and is being developed now, there were some questions regarding the continued viability of the commercial development outlined for the East section.

According to the Courier-Post newspaper a year ago, development and logistics firm NFI Industries of Camden NJ prepared their own report showing that in a post-pandemic world there currently wasn’t a market to support the originally envisioned commercial district at the Victory East segment of the project (created just 3 years prior).

NFI’s report and commentary showed that in contrast to retail and office, the industrial leasing market was fast growing. Add to that the property location being close to Rt 295 and the Turnpike, developing a warehouse for the Victory East segment was a better suited development for the property.

Interestingly the residential developer owned the entire property and seemingly sees no problems with the warehouse being developed next to their luxury housing complex, as they sold the Victory East property knowing a warehouse was planned.

Area news website 70and73.com in March 2022 published an article on the warehouse approval, and quotes Board member Marlyn Kalitan as commenting in the meeting:

“I’m disappointed that we had this wonderful plan. It almost feels like every other meeting now we have these bait-and-switch meetings where we start out with a wonderful plan and we end up with a plan that isn’t so wonderful.”

Cherry Hill Planning Board Member Marlyn Kalitan, at the approval for a warehouse in the Woodcrest area of Cherry Hill. Reported by 70and73.com

The Enclave at Woodcrest

As mentioned the originally planned residential development did continue into development, and it is expected to lease the first units in the summer of 2023.

The large multi-building residential complex is now officially named Enclave at Woodcrest Station. Their Facebook page was just created this month and currently has less than 20 likes. You can follow them here.

The project will consist of 6 residential buildings offering a total of 370 units, of which 53 of them will be affordable.

The project features a central green park area, a pool and clubhouse and a dog park area.

In fact, the developers are already looking to further improve the development by returning to the Planning Board to refine the community aspects, looking for approval on development of a two-story clubhouse as well as other outdoor activity areas such as pickle-ball courts!

The two L-shaped frontmost buildings are the largest and also the most furthest along in the development.

They form an entrance main street into the Enclave which leads to the center green space and community area.

The buildings are 4-stories tall and feature recessed exterior balconies.

As of last week three of the buildings were fully enclosed with roofs, walls and windows.

The back three buildings are in various stages of development. Frame only, two floors developed, four floors but no roof.

Currently they do not have a website for the Enclave at Woodcrest Station so I am unaware of the housing options and pricing.

NFI Industries has wasted no time after approval in developing the 162,000 sq ft warehouse component for the Victory development.

Approved in March, the concrete floor was already in place during our visit to the project site last week in mid-December 2022.

Wood forms were being created on the already poured floor, which I believe are the forms for the warehouse walls. I imagine they will be poured onsite laying down and then raised up (tipped) into place.

According to the Planning Board meeting commentary, this warehouse is “spec” build meaning they did not have a tenant signed on at the time of approval and the start of construction.

Keeping the new apartment complex in mind, the warehouse dock bays and trucks will be on the other side of the warehouse, away from the apartment units.

The NFI website maintains a marketing page and PDF sell sheet for the project, looking for a tenant.

The specifications from the September 2022 flyer show the project as having 37 dock doors, a 2,900 sf office area, 22 mechanical dock levelers and 2 Drive-in doors.

Parking is set for 36 Off-Building Parking Spaces, and 58 car parking spaces (with room to expand to 82).

They list a 36 foot “clear height” meaning the interior space that a client can use for storage.