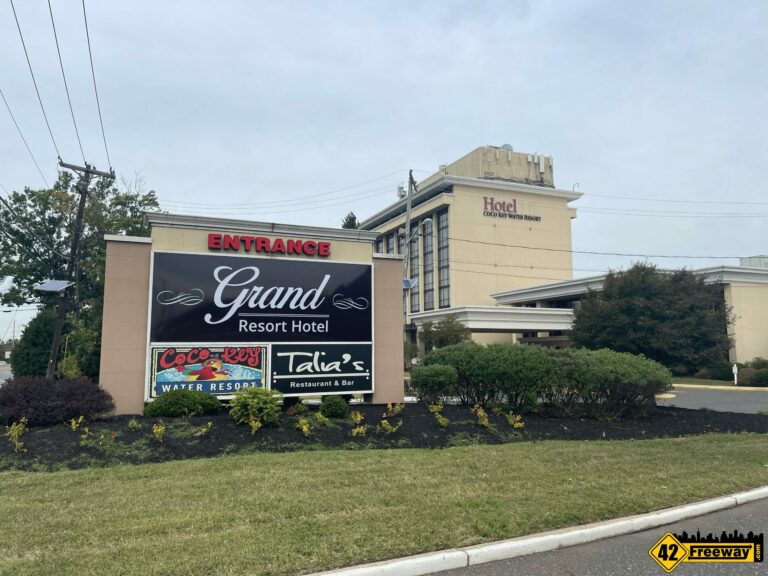 The Grand Resort has taken over the former Hotel ML in Mt Laurel, and they are open now for room stays! Restaurants are getting the final touches for a reopening in several weeks, and the Waterpark will be opening at a later date, hopefully still this fall.

I visited the Hotel on Friday and saw the beautifully remodeled lobby area and restaurants. Marble is everywhere, even up in the hotel room floors! Most of the new Grand Resort signage is up outside.

I had a busy weekend down in D.C. hanging out in the rain with the Phillies, so I am just getting online now!

The hotel has over 200 rooms total, and currently 98 rooms are available to book right now.

As is common in large hotels they do have a casual snack area in the lobby but at this time the hot food offerings will become available when the restaurants open.

The remaining rooms will be opening at a later date after some additional refurbishment. We’ve been told that they are in a separate section than the currently opened rooms, so there will be no inconvenience to guests staying.

This is a large complex of hotel rooms, restaurants, a massive indoor waterpark, and event space… so it makes complete sense that the new owners are opening up different aspects of the facility in spaced out timeframes!

The Grand Resort is located in the core Mt Laurel hotel corridor, at a prime location on Rt 73 between the Rt 295 exit and the New Jersey Turnpike Exit 4.

As mentioned this property was previously the Hotel ML.

It had closed during the pandemic shutdowns and was then sold at auction.

42Freeway was the first to report in July 2022 that property had been sold, and the new owner had crews on site working hard to have the site open this year.

At the time it was expected the hotel would open late summer. Actually they did open around mid-September, just after labor day.

You can go online right now and book a stay at the hotel, which right now is very reasonably priced.. I assume because it is so new and the restaurants are not open yet.

This property is very well known in South Jersey.. yes for the large hotel and event space, but also because of the really impressive Coco Keys Indoor Waterpark!

Many families over the years have enjoyed the water park which offers an amazing array of wet and wild fun!

I love that the tubed slides actually exit out the side of the building and then come back in… but always within an environmentally controlled atmosphere.

When I visited on Friday I spoke to the front desk and asked for a manager, who was unavailable at the time.

I wanted to see one of the rooms, and also hear more details on the plans.

But I did get to see of course the beautiful front lobby area with high ceilings.

My initial impression is that it lives up to the “Grand” name.. and having a water park (to open over the next few months) really does make it a resort!

I have to admit though I was not in the hotel under previous ownership so I don’t know exactly what was changed.

A representative at the hotel did tell me though the new owners are sparing no expense in making this a true higher quality hotel and resort experience.

Attached to the main lobby area is an bar and dining area, designed of rich dark wood. I am not sure if that aspect is unchanged from prior.

For restaurants, the new Grand Resort Hotel website is up… and lists Talia’s Restaurant Bar, Gators Grab-N-Go, Wet Rooster Bar, and the Little Shop of Coffee.

I believe the Wet Rooster bar refers to the bar inside the Water Park.

Yes, when they open the waterpark you’ll be able to get the full warm tropical experience in the middle of the cold New Jersey winter… with bathing suit on and a margarita in your hand!

Note: The Water Park may require separate admission from the hotel stays.

For the hotel they will also offer a fitness gym and seasonal outdoor pool.

The Courier-Post also has an article online today (subscriber only) and they say the water park will have a new name when it opens.