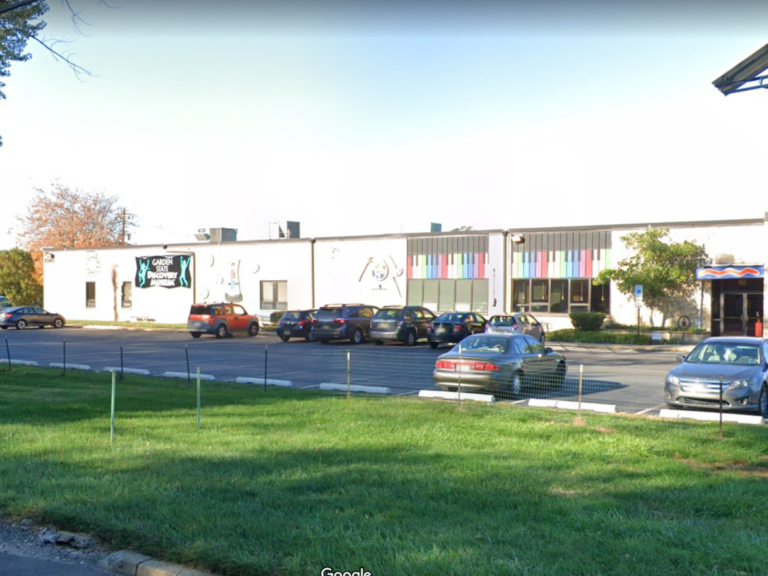 A Tesla Collision Center is planned for Springdale Road in Cherry Hill, taking over the property which was most recently the Garden State Discovery Museum.

Monster Golf is in the rear of the same building and it appears they are unaffected by Tesla coming in to the Springdale road side of the building.

This 49,500 sq ft Tesla Collision Center will be the second Cherry Hill property for Tesla, as they operate a Sales and Service center on Route 70.

The design documents point out that since Tesla vehicles are 100% electric cars, there are no emissions or engine oil in the facility.

We do not have a full timeline on the Tesla project, but 42Freeway has seen the full set of construction plans.

The Garden State Discovery Museum has an operating website, which back on March 16th, 2020 announced a Covid impacted temporary closure starting . It seems they are officially not returning, at least in that same location. We have reached out via Facebook for comment.

Hat-tip to Neil at A View From Evesham for noticing this Tesla project and letting me know! There are a ton of amazing projects happening in Marlton and Neil is THE source for info there! Go Follow his page on Facebook!

We were then able to track down the Tesla Collision Cherry Hill Construction plans.

Four years ago Tesla opened up a sales and service center on Route 70 in Cherry Hill.

It was a nice win for Cherry Hill, as it’s the only service center for South Jersey.

There are other locations in the Princeton area, Devon PA, West Chester Pa and Wilmington.. but the spacing of them means a lot of Philadelphia customers are also driving into Cherry Hill.

With Tesla now looking to develop a collision center in Cherry Hill, this further solidifies the importance that Tesla sees in the Cherry Hill market and central location.

The Collision Center building sits on Springdale Road, somewhat centered between Route 70 and 73.

The location will place the autobody business in the center of a broader affluent area (which has a higher number of Tesla purchases) and provide easy access to Philadelphia customers and the rest of the Delaware Valley.

But it seems the Tesla owned and operated Collision Centers are a new concept for them, at least in the Delaware Valley area.

We found mentions in a Tesla owners forum that one is planned in King Of Prussia.. if King Of Prussia is just getting a facility now, then yeah.. this is a new thing for them! 🙂

As mentioned, we’ve seen the Tesla Collision Cherry Hill plans… and they are taking over the space which previously was home to the Garden State Discovery museum.

One obvious question would be… “Where are the bay doors going?”

So while not really used when it was the children’s museum, the left side of the building has 4 bay doors.. 2 sets of 2.. and it seems Tesla has designed their facility to use those doors.

We have not seen a mention in Cherry Hill Planning for the new Tesla property, so it makes me think that there are no changes to the building to warrant approvals, and using the existing entrances is probably a big part of that.

The two pairs of doors appear to be set-up as pairs of entrance and exit doors.

Two are marked as “Wash Bay” which washing the cars would be the last step before turing over to customers.

The other two appear to be the main entrance bays into the building.

The documents in one area refer to this as a Collision/Service center… but I am not clear if that means they will treat this as also as a Service Center. The drawings and naming seem to indicate Collision Only.

The drawings show a small lobby, office, break and restroom area at the corner (Pin Oak Lane corner with Springdale)

Along the front is an area labeled Parts and Storage.

Paint booths will be added in the center of the building with space surrounding for cars to move to other stations… such as general autobody repair areas.

The Garden State Discovery Museum was a children’s interactive museum which was as much a play and imagination area, as it was a museum.

The museum opened in 1994 and was a huge success.

In the late 90s my youngest daughter was a toddler and we visited the museum regularly! Even Grandmom would take her.

A key feature of the museum was different play areas set up like a TV show set.. where a diner, performance stage, medieval castle, Flyers hockey rink and other fun activity areas were available for children to let their imaginations run!

Honestly its been 20 years since I have visited!

The year 2020 was tough for all businesses with New Jersey… first being required to shut down and then opening under tough health oriented regulations.

Which you can imagine is extra tough on a children’s museum where “kids playing and touching objects” is the business model.

On Monday March 16, 2020 they closed temporarily while restrictions were in place.

Commenters later said they had seen that the museum was being cleared out (last year).

We could not locate an official statement regarding if the closure was temporary, permanent, or if they would reopen elsewhere.