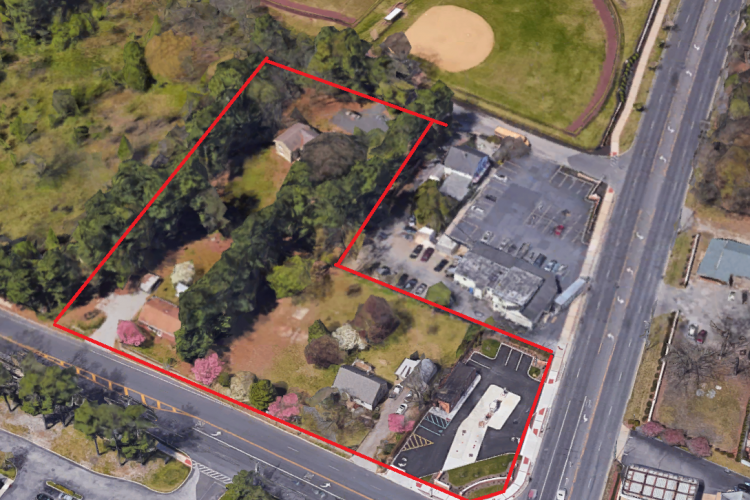 The beloved Masso’s Deli and Pizzeria will soon have a new neighbor when a new Super Wawa is developed on the corner where Super Jet gas station was located at Lakeview and Clementon Rd.  The new Wawa property will extend down Lakeview Drive and actually it will extend down and around behind Masso’s!  To support the expansion the developer will be demolishing a few immediate homes (three?).  The intersection also includes a Wells Fargo Bank and the Chophouse restaurant is close by.

While not explicitly stated, it’s a safe assumption that the existing “classic” Wawa just past the lake at Kresson-Gibbsboro Road would close when this new location opens.

Wawa officials and the developer appeared before the Gibbsboro Planning Board in January 2020 for full and final approval of the Super Wawa with gas pumps.  MarltonPike.com was not able to attend this meeting but we’ve confirmed with the Planning Board office that the project was approved, and we are basing the below project details here on a 2018 review the developer had with the town (meeting minutes).

A town representative stated that some additional approvals are still needed from the county and demolition permits have not been submitted yet, but they are hopeful for the project construction to start this spring.

First Presentations Were in 2018

As mentioned this is not the first time Wawa has presented to Gibbsoro officials, but it seems to be the first time the asked for official approval.  Back in August 2018, Wawa presented a preliminary concept plan for the project which the town reviewed ahead of necessary County approvals.  From the excellent meeting minutes online we can see that this has been a longer term discussion with the town (they also met in April 2018).

In the August 2018 meeting Wawa representatives explain they had secured additional properties to make the overall lot larger, and offer flexibility for a site plan providing better traffic flow.  The “L” shaped property wraps around Masso’s to Troth Ave.

It was explained in August 2018….It will be a 5,500SF Wawa with 6 fueling positions. It is basically the same proposed use from their original plans, but they have been able to achieve a much more desirable plan for circulation and other purposes by expanding the area of the project.

The developer of the project, J & J Construction of Marlton has considerable experience with Super Wawa development, having completed several including Bellmawr and Somerdale, and they are currently working on a Pennsauken project at the former site of Connie Macs bar.

Gibbsboro Mayor Is Supportive of the Wawa Project

The Gibbsboro Wawa is about 2 miles away from another Super Wawa proposed in Voorhees, basically straight up Kirkwood/Gibbsboro Road.  The Voorhees project will again try for approval after being rejected previously.  Back in 2006-2008 things got very heated for the same project, with laws and lawsuits around the Voorhees project.   Meanwhile in Gibbsboro, Mayor Campbell has previously express support for the Gibbsboro Wawa project… highlighting the need to increase non-residential ratables, and with growth coming to the area …if done smartly, he would prefer to have Gibbsoro benefit.

Back in 2018 the Mayor did indicate he was not open to a driveway entrance onto Troth Ave, due to the Little League field being located there and the concern of children walking over from the field to Masso’s or Wawa.

The Mayor had this commentary back in 2018 regarding the state of commercial development n the town, and the need for non-residential ratables:

Mayor Campbell commented that he is sure many people don’t want a super Wawa. Frankly, people felt the same way for the CVS and Dunkin Donuts. The reality is they came in and they function pretty well. There is a Wawa strip plaza in town and for those who frequent that facility, traffic doesn’t flow very well. The parking lot is too small and undersized for a Wawa. The super Wawa would remedy that problem. The Mayor is convinced there is going to be a super Wawa on Route 561 somewhere and it’s probably going to be between Clementon Road and White Horse Road. It may be in Gibbsboro or it may be in Voorhees. When it happens the Wawa in Gibbsboro will close. Everyone has seen what the superfund site has done to Gibbsboro. Brandywine is trying to get out of southern New Jersey and moving back to Philadelphia. They’ve been knocking down office buildings. The Borough is losing tax base. The ramification is the taxes go up. The other issue that this addresses is there are a number of small lots including residential and they are an island. There is a lot of vacant retail space in southern New Jersey. It’s not getting better. The reality is the economy is changing. We are witnessing a massive technological impact on how we live. The need for office has been diminishing. There is less housing being absorbed by the millennials. The owner of the Wawa strip stated that he is limited as to who he can bring in because the Wawa is so busy and they take up all the parking spaces. For all the reasons stated, the Mayor thinks serious consideration should be given to this project.

Cinder Bar Planning to Take Over the Marlton Tavern Liquor License, According To Public Transfer. Was the Tavern’s Last Beer at the Bar Already Served?

Has the Marlton Tavern already poured it's last beer at the bar? The growing Cinder Bar restaurant concept looks to continue its expansion, with plans in the works to open it's third location in Marlton NJ, taking over the former Marlton Tavern license, and presumably the location.  This is according to a published PUBLIC legal notice regarding the transfer of the liquor license to Cinder Bar ownserhip.  Of course in today's current retail/economic situation... anything can change so we'll have to wait and see.

Upgrades to the Cherry Hill Chick Fil-A on Haddonfield Road

This week the Westmont location reopened, and in our Sunday visit it seems word is already out as they were very busy. McDonald's restaurants across the country have been refreshing their store presence with extensive remodeling, or as the case with the Westmont NJ location on Cuthbert... a full new building
This Post Has One Comment