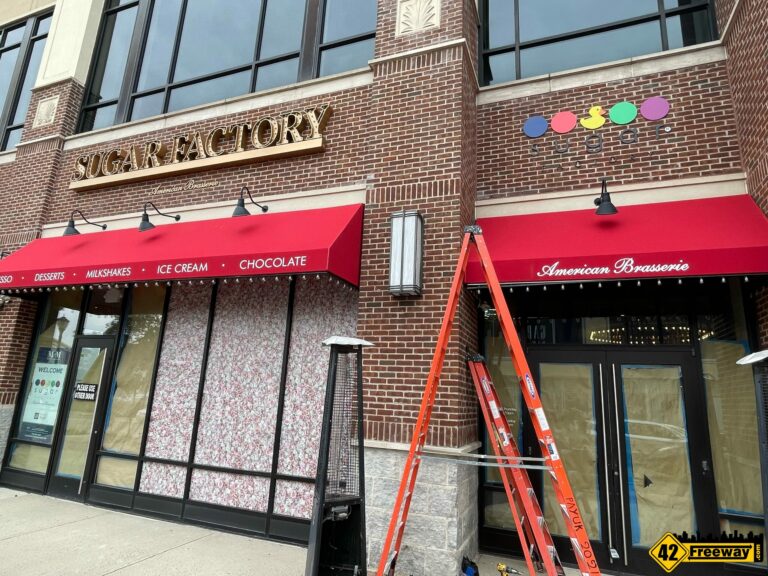 Sugar Factory Cherry Hill is one of South Jersey’s most anticipated Fall restaurant openings, and they are knocking out the last few small things ahead of final Inspections and opening.

An October opening is realistic, and quite possibly EARLY October.

If you aren’t aware of Sugar Factory, the short intro is; a higher-end casual restaurant where decadent and innovative desserts and drinks make for a very unique and fun dining experience!

How creative can the be? How about a 24k Gold Burger platter? Or Rainbow Pancakes? or Insane Milkshakes like you have never seen before where the fun tasty treat literally jumps out of the jar!

But keep reading and I will explain more.

They are still hiring for all positions! Kitchen, servers, bartenders. Yes there is a full bar. Here is one link but give it a Google.

Inside the soon-to-open Cherry Hill restaurant there is still a flurry of activity, but it seems to be all smaller finishing details.

And this week the exterior signage and awnings were put in place!

Add in the really bold celebrity photo walls outside… it really brings out the Sugar Factory vibe of the property. Very exciting just to see it!

By the way, 42Freeway/MarltonPike was the very first news outlet to break the news on Sugar Factory’s plans for Cherry Hill. back in November 2020. Within a day of that first article, every major area media outlet had their own version up!

With a pandemic in the mix slowing construction around the globe, its been a long process.. but it’s sooo close to opening in our Cosmopolitan Town!

With locations in some of the world’s most cosmopolitan cities, including Las Vegas, New York City, Bahrain, Chicago, Miami and Orlando, Sugar Factory is known the world over for its celebrity-endorsed Couture Pops, which have turned sweets into the latest designer accessory.

They’ve taken over the location which formerly was a Zinburger.

While they only have 25 locations in the USA in “cosmopolitan cities”, the Philadelphia metro area is well represented with locations in Philadelphia, Atlantic City (Hard Rock) and Delaware (Dover Downs)

Oh.. did I forget to mention that I was INSIDE the new Sugar Factory Brassiere in Cherry Hill?

Well I was… and the place looks amazing!

There are separate sections to the restaurant. In the front is the candy and ice cream counter area, as well as the bar. The back separate section is the main dining area.

While not an overly large restaurant space, they’ve smartly cordoned things off to give different customer experiences.

The front area features a whimsical white-toned and pink themed décor, with the ceiling painted like a blue sky with fluffy white clouds!

Bright accent builds are used in a few places to add to the festive and fun feeling.

The ice cream area has white marble with grey streaks…. like a licorice swirl in vanilla ice cream.

I even got a good peek into the kitchen area!

But.. I only caught a glimpse into the back dining area. It was enough to see the mood changes a bit in the dining room

The décor still leans towards a light color scheme with textured wall coverings.

I caught glimpse of the signature “Celebrate” and “Hello Gorgeous” signs along the back wall… all part of the instagrammable experience!

I think I also saw on the left side a digital TV wall. Maybe I should’ve moved a little slower and soaked it all in!

So, quickly I caught up with a Senior member of the local management team, who really could not have been nicer to me… fully recognizing the value and impact of “smaller” news websites like 42Freeway!

Which that seems to be a big part of the Sugar Factory culture and success, considering they’ve been named “the most instagrammable restaurant”! They fully understand how one small photo, one small website.. can be very impactful!

And as you would expect I was similarly respectful and asked if I could take a photo or two of the interior… to which i was told the PR team would reach out to me.

Well I just couldn’t wait in sharing an update!

But hopefully I will be back soon to get interior photos.. and of course I’ll be there at the opening to share with readers!

Unofficially, Sugar Factory is hoping to move through final construction permits next week, and then open up very soon after that.

That being said, if you aren’t familiar with Sugar Factory (and I’ll cover that shortly), their openings typically feature well known celebrities in attendance. And I imagine that takes some time and coordination?

But I know one celebrity who would be readily available. Mark from 42Freeway.com! Ha!

So yeah if the final pieces land perfectly as the should, I expect Sugar Factory Cherry Hill to open sometime early October. And yeah I get that October starts tomorrow!

This isn’t completely news to many.

A few weeks ago a press release went out to area media outlets stating they were targeting “as early as September but maybe into October” for the Sugar Factory Cherry Hill opening.

I didn’t report on that press release… well I didn’t receive it! Despite being the site that first broke the news two years ago that they were coming to Cherry Hill (which then had every other area media outlet put a story out the next day), I didn’t make it on to that media list!

But no hard feelings. Just make sure I am invited to the grand opening and “we good”. 🙂

Of course Mark from 42Freeway is always trying to offer more to the readers than any other media outlet can… so yeah I have the exterior images, and can share some of my experience of going inside! Ha!

Sugar Factory is a restaurant, bar and confectionary shop, and are known for their over the top colorful desserts, goblet drinks and Couture Pops.

They’ve also aligned themselves as a place for celebrities to be and be seen!

It appears the menu can vary slightly from location to location.. so I am basing this off of the Philadelphia location.

Sure there are a lot of fun dessert items on the menu, but there is also a lot of awesome and delicious real meal items.

Heck I didn’t even realize they serve a somewhat comprehensive brunch menu featuring pancakes, waffles, eggs and crepes! Over 40 options to choose from including Sugar Factory’s signature Rainbow pancakes, and a variety of breakfast sandwiches.

Heading into the lunch category they offer many very unique burgers!

Or if you really want to go all out.. how about a $150 24k Gold Burger platter! Seriously!

There are about 20 appetizers on the menu with all the favorites covered, including Rainbow Sliders.

Pastas, Stir-fry and sandwiches are also on the menu…

And of course the big Daddy entrees which include Pan Roasted Salmon, Chicken Milanese, and a few steak options including a Filet and Lobster Surf and Turf!

In the intro I mentioned the Insane Milkshakes.. and they truly live up to their name!

One example is the Nutella Banana Milkshake featuring Vanilla ice cream, Nutella and whipped cream and a chocolate dipped banana. That all seems reasonable. But then add a unicorn lollipop, a candy necklace and complete cover the mug in chocolate and sprinkles!

Smoothies and Aqua Fresca are also offered in a variety of tasty flavors.

And for something unique and more adult, the offer fruit mimosas with a matching fruit flavored popsicle!

Or how about a Goblet!

They may sound fruity and fun, but they are not light on the alcohol or the wallet… and probably meant for at least two people.

I think I’ll go with the Tropical Fruit Punch Goblet designed by Snoop Dogg himself!!

And yes there is a candy store!