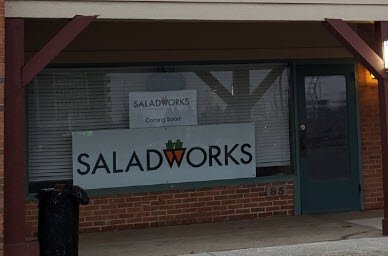 The Barclay Farms Shopping Center has seen better days, as the center has suffered since the Asian Food Market closed several years back.  And while it has been having difficulty filling the vacancies, a well-known name is moving in, as Saladworks has indicated they plan to open a location there.  Signs have gone up in the windows of a storefront on the western end, near Pho Barclay.  The storefront was most recently home of Barclay Cafe, but has been vacant for the last few years.

Building permits have not yet been posted and the inside is essentially an empty shell, so it may be a while before the new restaurant is open.  The new Saladworks will be the 3rd in Cherry Hill, with the others at the Cherry Hill Mall and Sawmill Plaza.  Saladworks currently operates more than 100 stores in 17 states and is currently experimenting with opening smaller stores inside of supermarkets, opening in grocers in the Philadelphia area (though not yet in South Jersey).