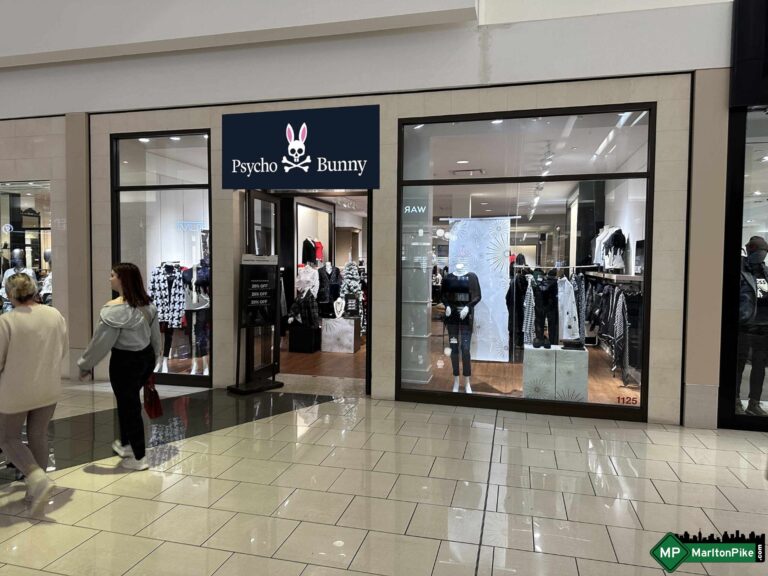 Psycho Bunny Menswear is coming to the Cherry Hill Mall in 2023 and they are already looking for the contractors to build out their new store. But where are they going in the Mall, and who is leaving to free up the space?

The news of the store coming to Cherry Hill was announced earlier this year by Press Releases and picked up by the other media outlets.

The Cherry Hill Mall website has been updated to show that Psycho Bunny is “Opening Soon” but only lists “Grand Court” as a location.

Well at least that narrows things down a bit. While there are several empty storefronts in the mall, it seems they are all rented in the center Grand Court. So where?

Psycho Bunny? What is that!?

But first, with a name like Psycho Bunny we have to explain what they are!

Psycho Bunny was founded in 2005, targeting the creation of the perfect polo shirt.

Their signature logo is as bold as their designs… A skull-and-crossbones with bunny ears!

A May 23rd article at Forbes.com dives into the rabbit home of Psycho Bunny.

They have significantly increased the growth rate of the number of locations.

It seems they are somewhat doing the reverse model of what we normally see from stores. As the rest of the retail world has started with physical stores and scrambles to find a successful online model… Psycho Bunny grow success online FIRST, and are now moving into physical stores.

The stores help feed sales online, and their existing online presence and customers are making the new stores an instant success.

The recipe is working as the reported to Forbes in May that they tripled overall sales in a year and the online business alone had doubled.

In the Philadelphia are they opened a Psycho Bunny location last year in the King of Prussia mall.

So where? Where in the Cherry Hill Mall are the going, and why does it matter?

Well my interest was piqued when I wanted to put up a quick story on Psycho Bunny after hearing from industry contacts that they were bidding out the work for the new store construction.

Since I missed the earlier announcement (I seriously get no press releases), this seemed like a good trigger point to jump in.

Unless time is really pressing down on me and the distance is too great, I almost always go to the physical location of what I am writing about. I don’t even like to use other folks photos that then send to me. It helps the writing process to actually see it.

So I have a map that was provided with some construction documents as well as a suite number. I was heading over to have lunch at the awesome new Nan Xiang Long Bao at the Garden State Park complex and thought I’d shoot over to the mall. (Incredible, by the way!)

I never even looked at the mall directory.

Expecting to find an empty storefront when I arrive at my location I see…. a store is already there.

I count stores on the map. I look up the mall on my phone.

Yup 100%. The store listed in construction documents already had another store “living” there.

Up to this point though nothing has been officially announced by Chico’s regarding Cherry Hill.

So I walked in to Chico’s and acted like I was shopping for gifts. I am at the back of the store just as an employee is hurriedly walking up to the cash register.

“Hey, I heard you guys are closing soon?!”, I ask… looking like every casual middle-aged Husband and Dad who is just curious, like Dad’s are.

And she slows down just a but, turns to me while still walking and in a quieter voice so only i could hear…

“We close next month” she says.

So I get that an employee sharing that is not an official statement. But why would she lie?

And my construction documents show their location AND suite number.

Plus as I mentioned, the Cherry Hill Mall website lists “Grand Court” as a location.

Chico’s has been announcing to Wall Street that they are closing underperforming stores. In their 3rd Quarter conference call they say:

due to the continued improving productivity and profitability of our store base, we now expect to close 26 stores this year, down from our original target of up to 40.

Except the Cherry Hill closure seems to fall into 2023.

I did reach out to Chico’s, emailing and calling their Investor Relations representative (who has not replied since my inquiry, which admittedly was late yesterday).