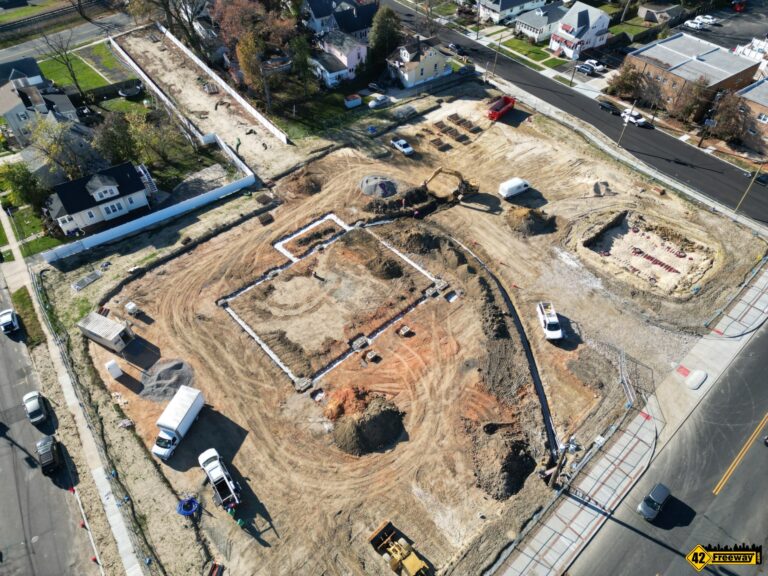 A new Oaklyn Super Wawa on the White Horse Pike is in full development mode, with the lot fully cleared and foundation items started.

Sidewalks, curbing and roadway changes have been completed also

At the site, recently the underground gas tanks were installed, and in my visit today the concrete foundations to support the 5,051 square foot building could be seen (from above).

Crews have also laid utility piping into a curved trench heading into the back of the building.

42Freeway first brought to readers the plans for this Oaklyn Wawa back in January of this year.

At that time the Burns Used Car building was still standing, but some dirt was removed… presumably for a small environmental clean-up associated with the decades of operating as a car oriented business.

At this time we do not have an estimated opening date, but over the next few weeks I would expect to see the core building and gas station area canopies to appear.

This new Wawa convenience store and gas station is located at 1006 White Horse Pike in Oaklyn.

The core convenience store building at about 5,000 sq feet is 10% smaller than the typical Wawa store that I’ve seen get approved recently. Presumably to make the space work better on the lot.

With the property running along White Horse Pike, the building and gas pumps will be positioned side-by-side. The building will be on the West Cedar Ave side.

They will have 50 parking spaces total.

While having the pumps in front of the store seems more common (in my experience) I feel this side-by-side positioning will actually be better traffic flow in the lot. Most store customers should be able to enter and leave without crossing paths with the gas pump area.

To make room for the new store, three homes were demolished. One on Cedar and two on Park.

There is a center access road out the back of the property and it appears they will not be using it for the Wawa as an access point.

There is an existing “classic” Wawa two blocks away across from the Ritz theater. It is expected that once this new store opens, the classic Wawa will close.

This is the second larger development project recently for this area of Oaklyn almost a year ago Mulligan’s Bar & Grill opened their large expansion. Mulligan’s is just two blocks from the new Wawa that is under development.

Previously the property was a car sales facility with auto repair capabilities.

I found indications of car sales taking place there going back to the 1940s as Johnny’s County Motors.

They later became Fleetway and then Classic Chryrsler.

Most recently the Burns Auto Group was using it as a used car lot.