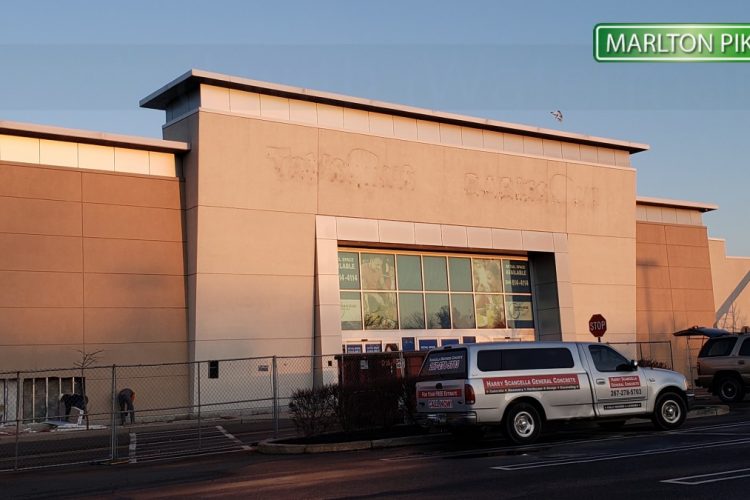 There is a lot going on at Cherry Hill Commons on Route 38 in Cherry Hill! The new Planet Fitness looks like it is getting near to completion.  They are taking over the storefront formerly home to The Maxx Fitness Clubzz (not a typo).  Temporary signs have been placed on the facade and doors and they are now selling memberships as part of their ‘Pre Grand Opening Sale’ (though the prices appear to be their regular prices).  I contacted Planet Fitness corporate but they would not provide an opening date, as they are unsure when it will be ready.  For what its worth, the ‘Pre Grand Opening Sale’ ends February 13th.  Perhaps that’s when they open?? The inside of the gym looks like it is finished, but there is currently no equipment.   There are dozens of TV screens hanging from the ceiling.  And while its empty right now, two full tractor trailers full of brand new exercise equipment arrived on site Monday morning. While the construction of the Planet Fitness has been going on for some time, the site plan on the website of Paramount Realty, the property managers for the Cherry Hill Commons, were recently updated, and several preivously ‘proposed’ tenants are now listed as ‘Coming Soon’ Ross Dress for Less has more than 1500 stores across the United States, with stores at Garden State Pavilions in Cherry Hill, along with stores in Voorhees and Moorestown.

DDs Discounts is new for the area. Part of the Ross Family of stores, there are more than 200 locations throughout the country, though only one in New Jersey (Ewing). The closest DDs is in Philly. DDs advertises itself as your place for great deals on clothing, shoes, home decor, fashions, toys and ‘much much more’.

According to plans submitted, the current entrance to Toys R Us will be removed, as will much of the front facing.  The store will be divided into two separate stores with separate leases.  New front entries will be added to either side of the old front entrance.  The picture below shows employees beginning to remove the front wall where one of the new entrances will go.  A close up is below. No word on opening date for either, though I would suspect it is quite a ways off.

Have you been to DD’s Discounts?  Let us know your experience!

Cinder Bar Planning to Take Over the Marlton Tavern Liquor License, According To Public Transfer. Was the Tavern’s Last Beer at the Bar Already Served?

Has the Marlton Tavern already poured it's last beer at the bar? The growing Cinder Bar restaurant concept looks to continue its expansion, with plans in the works to open it's third location in Marlton NJ, taking over the former Marlton Tavern license, and presumably the location.  This is according to a published PUBLIC legal notice regarding the transfer of the liquor license to Cinder Bar ownserhip.  Of course in today's current retail/economic situation... anything can change so we'll have to wait and see.

Upgrades to the Cherry Hill Chick Fil-A on Haddonfield Road