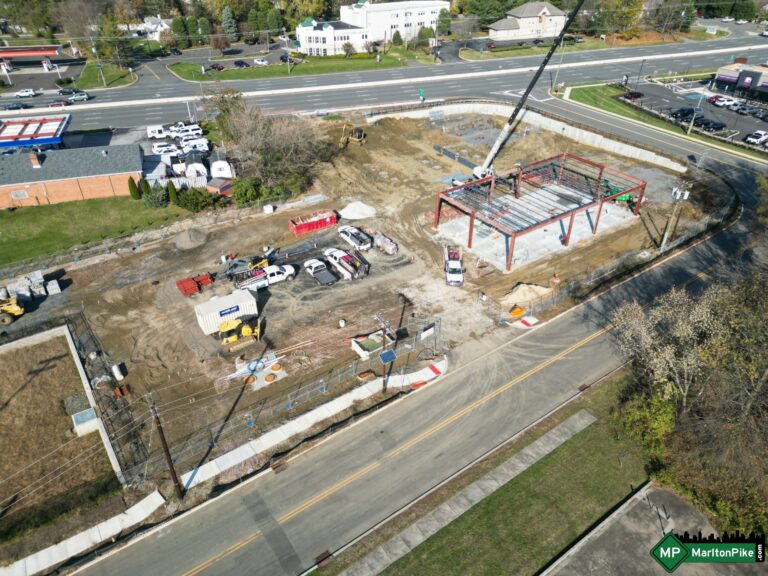 Approved almost 2 years ago, a new Mount Laurel Wawa convenience store and gas station for Rt 38 at Hartford Rd is taking shape, as the steel framework went up this month.

Stiles Sunoco sits at the immediate corner and the new Wawa will wrap around it in an “L” shaped property formed on the other sides by two local streets.

In terms of Wawa projects this one appears to be one of the smaller sites and convenence stores at 1.7 acres for the property and a 4,700 sq ft store.

As mentioned the new Wawa property will somewhat wrap around the back two sides of the existing Sunoco gas station with the Wawa property formed by Walnut and Sixth Ave.

With the traffic signal and surrounding local roads, the new Wawa has good access from the highway and local roadways (accessible from local resident’s homes).

A new Taco Bell is also located on Rt 38, on the other side of the under-development Wawa.

I’ve visited the site several times this year as they’ve prepared it for core construction. I saw that site prep work included a retaining wall segment along Rt 73 but hadn’t posted on it until I saw the building steel start going up last week.

The grade of the property ls slightly lower than Rt 38 so that mention of a retaining wall at Rt 38 and Walnut is because the Wawa property is lower. There guardrails along Route 38 amd Walnut.

The gas pumps and canopy will be situated on the section closest to Rt 38, with the store behind it. The back of the store will be along Sixth Avenue.

Since the property is “L” shaped they will use the Hartford road segment of the property (to the side of the building) for core convenience store parking.

While it has been 2 years since the approval, in Wawa terms things have moved rather quickly on this location with initial site work started about a year after approval.

While we do not have an estimated completion/opening date, from my experience observing these multi-stepped Wawa development projects across South Jersey, once the steel starts going up for the store the development team onsite will stick through with the project until completion.

In earlier stages such as site preparation there may be time gaps between phases as different construction crews are scheduled to take over their respective areas of expertise.

Some Had Concerns With The Approval

Some residents had concerns with the plan and rallied people to attend the Zoning meeting in 2020 and speak to the project.

It took three attempts to get the entire project covered in the meeting, with the meeting and questions spread out over two meetings.

The official underlying theme of the resident concerns were that the lot size was just too small to adequality support the Wawa store and gas station… factoring in the number of customers moving through.

Unofficially, folks online in Facebook town groups also expressed concern over impacts to the family owned Stiles Sunoco gas station which sits just a feet away from the new Wawa at the corner.

The Courier-Post at the time captured the concern from the Stiles family as:

“Competition is not our concern,” asserted Darlin-Jo Wilson, a township resident.
She said Wawa was “squeezing” its complex onto the site.
“Their plan requires too many deviations in too little a space,” she said of Wawa, which requested more than two dozen variances and waivers from the board.

Darlin-Jo Wilson, regarding the Wawa proposal on Rt 38. Mt Laurel Zoning Dec 2020 as told by the Courier Post

But in the end both the conditional-use variance and the site plan variances were approved but not unanimously.