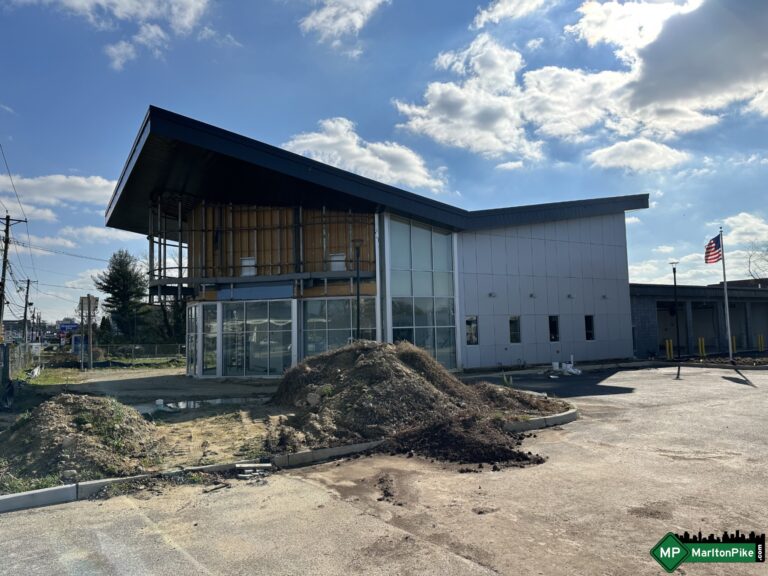 The new Mount Laurel EMS building which has been rising on Route 73 is expected to have a Spring 2023 turnover to the Township. We have a full status update directly from Mount Laurel Township.

EMS stands for Emergency Medical Services, which in simple terms means this facility is a new home base for paramedics.

Significant development has already taken place on the building before things slowed up a bit recently, mostly related to supply chain issues. Those issues appear to have been resolved and construction crews are expected back very shortly. More details on that below.

If you are not aware, the new EMS Facility being developed on Route 73 sits to the East of the NJ Turnpike exit, just past McDonald’s. A Wawa convenience store is directly across the highway from the new EMS building.

This is a very unique “Public – Private” partnership in that the new $3.8 Million facility is being developed for Mount Laurel at zero cost to the township!

Digital sign advertising company Catalyst Experiential is developing the building free-of-charge to Mount Laurel. This is in exchange for the right to display advertisements on the top front of the building, which sits on a highly traveled higher (regional) demographic roadway.

Catalyst Experiential will charge companies to display their ads on the two front mounted screens (which are angled to be visible by traffic). The revenue from the advertisements is expected to be great enough for Catalyst to pay for the cost of developing the facility.

Digital Monument signs (without the building) are already operating in Pennsauken, and are in the final testing stage in Washington Township.

For Mount Laurel the 7,860 sq ft building was designed with input from the EMS leadership team and includes all of the top requested features needed to make this one of the most efficient and advanced EMS facilities in South Jersey.

Catalyst Experiential describes the building as having:

Four 45’ long bays with garage doors on both sides of the building that allow for rapid response drive-through access. There are two separate dormitories, 2 laundry rooms, a training room, solar panels on the roof, and electric car charging stations, among other features. The training room can be used for voting on election day, fulfilling a township need for more polling locations.

It is my understanding that as part of the contract with Catalyst Experiential, Mount Laurel will be allocated time on the digital signage to promote the town, it’s events.. or even “Looking for EMS recruits!”

As part of the full 2019 deal with Mount Laurel, Catalyst Experiential was also approved for two other digital advertising monument signs; Route 38 and between 295 and the Turnpike (

The need for the new building is attributed by many to the NJ-DEP identifying that the former EMS building was improperly located on protected open-space land. Overall it’s an interesting story of how the Mount Laurel and Catalyst Experiential deal came to be… but honestly the Philadelphia Inquirer article (Jacob Adelman) from 2019 is written so well, I’m simply going to direct you there if you want more details on those aspects.

Keep scrolling and reading for more on the EMS building construction!

The project and partnership deal was announced three years ago in October 2019.

This was just a few short months before the pandemic literally rocked our world, impacting construction projects globally.

Even with those challenges the previously undeveloped lot saw construction activity start within the year of the announcement.

Over the course of the next 2 years though, additional impacts facing the construction industry and material supply chains caused some intermittent delays (as is the case with basically all construction projects!)

When I visited the site in April 2022 there property was filled with construction crews actively working on all aspects of the facility. At the time while most of the steel structure was developed, they were just starting the process to enclose the walls.

I’ve visited several more times over 2022, and in my most recent visit 2 weeks ago it was clear construction crews had continued to work based on the progress from April to November

Since April the following were completed (visual inspection)

The key areas that jump out as not completed are:

So in the commentary above, really all the details are in the mix! But here some additional commentary…

Funny thing… while I have visited the property several times this year, it wasn’t until yesterday that I decided to email Mount Laurel inquiring about a status update. By pure chance, the same day as my email, a Township representative was getting a status tour and update at the EMS project site!

So this information is very fresh!

As mentioned, supply chain issues have been an impact on them being able to close out the project.

One key example is the garage bay doors had been on backorder for several months. Without those doors, the building could not be fully sealed in, which kept crews from completing the interior finish work.

The good news is those doors have finally arrived, and will be installed very shortly!

The township expects the contractors to be back on site completing the remaining tasks, and the building is targeted to be turned over to the Township in Spring of 2023.

Overall, the building is really starting to take shape and the Township looks forward to its project completion as a service benefit to the residents.3