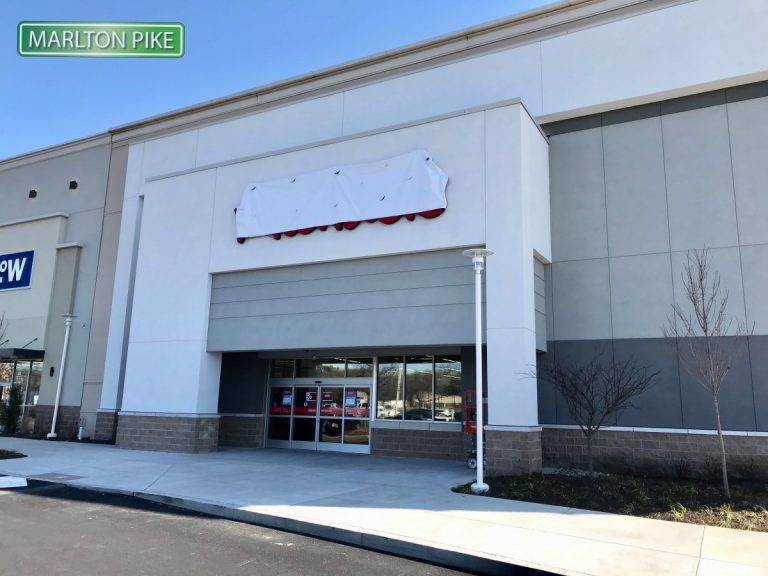 Michaels Craft store has had a presence in the Moorestown are for years, and later this week they move to a new location in the Moorestown Mall.  Technically this is a “relocation” as the prior  East Gate shopping location for Michaels will be closing around the same time.

The new Michaels store is in the former Macy’s building which has been completely redeveloped to be primarily an exterior entrance store.  The building houses several stores and only the Home Sense store is accessible from within the mall, while the other stores (Sierra, Five Below and Michaels) have been configured as an exterior row of stores… similar to a large strip mall where you park in front of the store and walk in.  An interesting take on solving a tough problem for the Moorestown Mall, as with Sears closing soon they will have lost 3 of their 4 anchors in a few short years.  Both Sears and Lord & Taylor stores will be empty as Macy’s is mostly leased.  The new configuration of the Macy’s building positions shoppers to pop into one of the new retail stores without entering the mall and passing other retailers.

This past November our sister site 42Freeway reported that competitor AC Moore was closing all of their stores, and Michaels was taking over a small number of the stores as well as the large Berlin NJ warehouse.  This could position Michaels for additional growth opportunities but should make them stronger as their key competitor is no more.

Specific to the Moorestown area, this is a double loss for the East Gate Center as they also house an AC Moore craft store which will also be closing as part of the larger full AC Moore closure.

There seems to be some confusion on the date of the relocation as the new Moorestown Mall store says opening Feb 28th but over at East Gate their sign says the new location opens March 1st.  Maybe there will be two days of overlap where both stores are open?