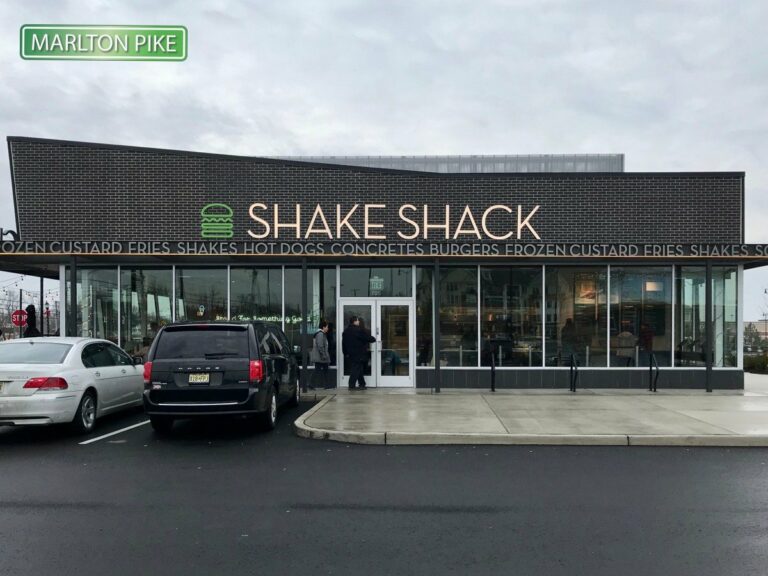 Just a few months ago South Jersey’s second Shake Shack restaurant opened, this one in Cherry Hill on the Haddonfield Rd side of the massive shopping and housing complex which used to be the Garden State Racetrack.   We were on a hiatus at the time, so while we didn’t get a chance to post about Shake Shack’s opening… we simply can’t avoid a delicious burger!

Recently MarltonPike.com’s Mark (and Mrs) tried out the new Cherry Hill location.  This was only our second Shake Shack burger ever, as we had recently had a burger at the still new Wells Fargo Center stands.

And let’s just get to it.. the burgers really are amazing!  So while I’ve read that a single patty is 1/4 pound, but they press it thinner so it just seemed smaller?  Well maybe I am just trying to justify that I ordered a double.   The meat is a proprietary blend of sirloin, brisket, and short rib.  Whatever that recipe is, it’s delicious.  We went with the ShackBurger which is cheese, lettuce, tomato and ShackSauce… which is very similar to a Thousand Island dressing!  Mark went with a double and Sharon went with a single.  Everything is fresh and delicious, and the meat is never frozen!  Oh oh oh.. and this is very important.  They use deliciously soft Martin’s Potato Famous Rolls which are baked not too far away in Chambersburg Pa.  Easily the most amazing hamburger (and hot dog) buns available.  It makes for an important combination of textures between the soft roll, the crisp lettuce, the melted cheese… mmmmmm.

Even the fries… well let me just say I have two things that I focus on with french fries.  One,  I want my fries golden, crisp and very lightly browned, and I go nuts when it’s clear the restaurant went a little long before changing that fryer oil!  Well as you would expect the Shake Shack fries were a home run!   Perfectly cooked and delicious.  My second french fry pet-peave?  If there is cheese it better be Cheese Wiz or a custom blend that tastes similar.  It can’t be the warehouse store giant can stuff.  And again… the cheese for the fries was delicious.  Writing this I want to go back just for the fries. And a burger.  oh man, I haven’t had a shake yet!!

The location of the Shake Shack is in the latest expansion area identified as the Shoppes at Garden State Plaza, which according to Inquirer.com was originally planned as additional condos and now will be 81,000 sq ft of several retail stores.

The first amazing thing about Shake Shack is they haven’t been around long.  They started in 2001 as a hot dog cart in New York’s Madison Square Park and didn’t even have a permanent kiosk until 2004!  Today they are spreading across the country, are more famous for their burgers than hot dogs… and publicly traded on the stock market with a total market cap of $2.5 BIILLION (2/1/2020)!

The Cherry Hill building is modern and bright with a lot of windows.  While they offer the traditional front register for ordering, they have allocated a decent amount of space to self service touch screen ordering, which we tried.  Orders are tracked by number and you are able to find a seat and wait to be called.

In a traditional burger restaurant way, the dining area and soda machines are right around to the side of the registers and kitchen, and outdoor seating is available when the season allows.  The restaurant sits directly on Haddonfield road but with parking and buffer you never feel like you are on the road.  And across the way clearly visible through the glass is The Habit Burger, which is another growing premium burger chain.

Oh and a Cherry Hill exclusive item which helps out an awesome local charity:

a few local exclusives including the Pie Oh My concrete – vanilla custard blended with pieces of Sweet T’s Bakeshop seasonal pie. The sweetest part? The Cherry Hill Shack donates 5% of sales from the Pie Oh My concrete to The Food Bank of South Jersey, an organization dedicated to alleviating hunger and providing nutrition education.