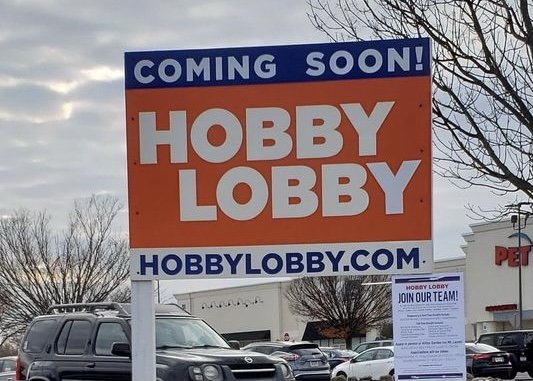 As Cherry Hill eagerly awaits its new Hobby Lobby to open, it would appear we are now in the home stretch as they are actively hiring for the new location!  Prior media reports indicate they are targeting a January 2021 opening, and in a recent discussion with the Deptford store (regarding hiring) we were unofficially told they are still hoping for a January opening.

News first broke of Hobby Lobby expressing interest in putting one of their stores in the Hillview Shopping Center off Route 38 way back in January of 2019.  With the bankruptcy of parent company Toys R Us and the closing of all stores in 2018, the newly abandoned Babies R Us left a large gaping hole in the shopping center.

The Cherry Hill Planning Board quickly approved a 7,170 square foot addition to the rear of the Babies R Us at the February 4, 2019 meeting.  This brought the square footage up to 44,170, which was enough for Hobby Lobby to sign on the dotted line.

Incidentally, if anyone has sent a drone up over this area and has a photo of the addition, please send it along so we can add it to this post, with full photo credits to you!  The photo directly below from Google Maps does not show the addition.

Construction began soon after that and completion was originally expected during this past summer.  Unfortunately Covid-19 got in the way and delayed the project.

But now…. we are getting close.  Last week, Hobby Lobby held a week-long hiring event in Mount Laurel.   And this week through Friday, they are accepting applications for the Cherry Hill store at their Deptford location.

They are accepting applications for Department Managers, Cashiers, Stockpersons, Bookkeepers, and Freight Receivers, with starting pay at $13 per hour.  (It should be noted that full-time workers make at least $17 per hour, and they are closed on Sundays!)

This will be Hobby Lobby’s 5th South Jersey store, with locations in Deptford, Sicklersville, Lawrenceville and Mays Landing.  It has more than 900 stores in the United States.  If you have never been to one, at the Cherry Hill Planning Board meeting, it was noted they are similar to a Michael’s or AC Moore.