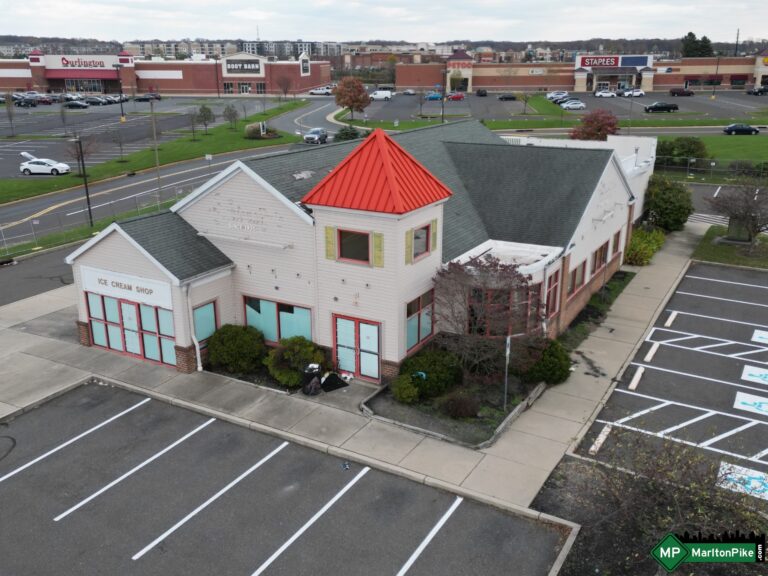 Construction fencing is up around the closed Friendly’s Restaurant on Route 70 in Cherry Hill, a sign that construction crews may soon be starting the demolition of the building. A new Chick-fil-A restaurant is planned.

Technically we believe this will be a relocation of the Chick-fil-A.

A clear reason for them wanting to build all new is that current location does not have the all-important drive-thru.

Chick-fil-A probably has one of the most popular drive-thrus in our area. Drive-thru sales represent a huge portion of revenue, and while there is a big expense to building this new Chick-fil-A restaurant they will probably quickly recoup that expense quickly.

And with the new location they’ll have the room to set it up better than any Chick-fil-A I am aware of! More on that below.

Factor in also that the new location being developed as a free-stranding building with really nothing around it, so it will be much easier for cars to see on Route 70. Basically the location and new signature building will provide free advertising which the don’t have to the same degree at the “old” location!

Lastly, access from Route 70 should be easy due to proximity of traffic signals and traffic flow within the shopping center.

The new restaurant is full sized at 5,147 sq ft and will support 98 indoor seats and up to 14 outdoor seats.

The Garden State Park shopping center (Wegmans) will not be without a chicken restaurant for too long as a Raising Cane’s Chicken Finger restaurant is planned… almost directly next to where the existing Chick-fil-A is! MarltonPike.com was the first to report on this back in June.

In reviewing the site plan which was submitted to Cherry Hill last December, it’s clear that Chick-fil-A is really changing things up with their new Cherry Hill restaurant.

The Friendly’s building sits in the middle of the dedicated parking lot area, and as a Friendly’s cars could drive all around it.

For the upcoming Chick-fil-A the building will sit to the far East side of the property.

The only vehicles really driving around the back of the building are for the dual drive-thru lanes. This gives them plenty of room for a very large front parking lot.

Another benefit of this design is there will be plenty of room to handle drive-thru overflow if it were to back up.

Ware all familiar with how Chick-fil-A can be so popular that they customers overwhelm the design capacities of the drive-thru lanes, and back up traffic into the street.

I know for me that frustration reduces how many times I shop at Chick-fil-A. I just don’t want to deal with it.

Well the management team at Chick-fil-A is well aware of this and have started the process to redesign some popular stores with new drive-thru lanes and parking lot configurations.

So there are two things that jump out at me for the Rt 70 restaurant,

Dual Drive-Thru lanes: While having two lanes for the outdoor menu board and speaker are very common in most fast food restaurants, they always merged back into one window for the payment and food windows.

But at this new Chick-fil-A they have two separate lanes all the way through.

Sure the one closest to the building will be the primary window and not used when they aren’t as busy (is there ever a time?)… but they will also have a full second lane.

So I am not really clear on how this works. is it like a bank where the food is sent via a tube? If anyone knows please comment at Facebook!

I also know other restaurants are being converted to this style.

More Space for Longer Car Lines: The other benefit with this store location is that they have the room to set the store and drive-thru at the far end of the lot…. and if the lines do become long, as they back up there is a long distance before traffic would ever back out of the Chick-fil-A lot.