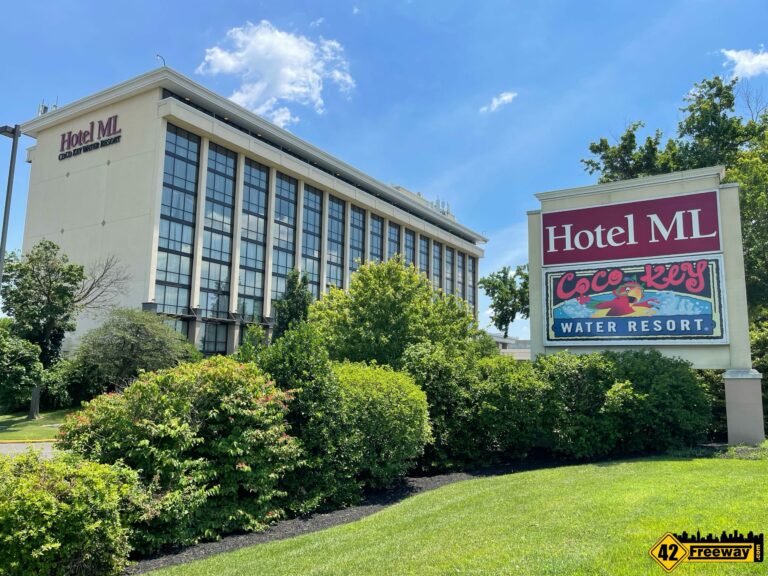 The Hotel ML in Mt Laurel and it’s attached Coco Key Water Park has been closed since the start of the New Jersey pandemic shutdown in 2020. It was sold at auction in March of this year for $13 million and the new owner plans on reopening the Hotel this year, and the water park afterwards.

The buyer is a company operated by Philadelphia’s John Wei. He is a prominent developer who builds and operates properties primarily in Philadelphia, including hotels and apartments.

UPDATE @ 5:17pm: I’ve been told the job postings are under “Dynasty Hospitality“. While it does say Mt Laurel there is no mention of the reopening hotel or location, which initially made me uncertain

The large Hotel property sits on Route 73 in Mt Laurel right next to the Route 295 exit. It is a very busy area of New Jersey loaded with many businesses, office parks and shopping centers and Exit 4 of the New Jersey turnpike.

The population, businesses and location has made Mt Laurel a dynasty in South Jersey hotels. New Jersey allows hotel properties of 100 rooms or more to obtain a special liquor license and Mt Laurel has FOURTEEN of them! Deptford in comparison has only two special hotel liquor licenses.

The former Hotel ML property includes a 279 room hotel featuring 14,000 square feet of meeting space, a restaurant and bar. The connected Coco Key indoor water park is over 55,000 sq ft, has 150,000 gallons of water for the pools and water attractions, as well as an arcade and dining options within the water park area,

The hotel and waterpark were so successful they even developed solar panel overhead coverings in the parking lot!

42Freeway has spoken with Mr Wei’s office, but with him actively guiding this project towards a reopening we weren’t able to speak to him directly.

We have spoken to a direct associate and gathered some information.

As mentioned the sale took place earlier this year and was announced with a press release, but none of the parties involved in the sale had disclosed who the new owner was, or what the plans were for the property.

I tracked down this story by getting in my car and driving over, and seeing construction trucks on site indicating something was happening! I maintain a list of about 200 stories that I am tracking and will routinely drive through an area and check on any progress.

During my visit I spoke to a few contractors outside but not getting a clear answers I used my ninja internet sleuthing skills and a few New Jersey State documents to determine the owner.

I’ll be upfront with this.. there are many key details I don’t know about the plans at this time but I feel this is enough information to share with readers; the hotel is hoped to be reopening in later this summer and the water park will then open some time after.

There will be a new brand (name?) for the Hotel but that was not disclosed to me yet.

Note: I will start publishing more stories with partial details. I know it will still leave a lot of open questions but its better than me being frustrated by seeing my competition publish the story that I knew about for weeks. But I digress.

After chatting with a member of the ownership team on the telephone, I was given Mr Wei’s email address and I sent him and the team a list of sample questions.

As mentioned, things are very busy right now at their office and I did not get a reply. I called back again and chatted with his staff (who is amazingly pleasant and helpful) to confirm some of the details of the property.

I would also like to hear about Mr Wei’s decision to step into New Jersey with such a large investment. While there isn’t a concise published list of his projects, what I could find online seems to be focused in Philadelphia with a start in Chinatown

Over the last 10 years or so John’s name has been referenced in several higher profile development projects. While he does have a development company (United Development) and typically creates a new LLC for individual properties, the articles in leading Philadelphia media outlets seem to always include his name.

Which is simply a sign of respect for his accomplishments.

Below are a few of the Wei projects that we chronicled by Philadelphia Media outlets. There are many more that were developed and operated that didn’t make it into the news.

Independence Lofts: This 156,000 sq ft building in the Spring Garden area of Philadelphia was decades ago home to Independence Press. It was long abandoned and had become a key target for redevelopment by city officials. It was approved for 92 loft-style luxury residential units, and a company of John Wei purchased it in 2015 to complete the development into the Independence Lofts apartments and operate the property.

Sleep Inn: A hotel operating on Cherry Street, in the Chinatown section of Philadelphia.

Red Bell Brewery Building: This building was bought by Mr Wei in 2016 to redevelop into a large 147 unit apartment building. He did present the plans to the community but just 2 years later (before developing) he sold the property for more than double the price, as reported by OCF Realty

1026 Arch: A smaller row-style building in Chinatown was purchased by John Wei. A 2018 WHYY article describes the fate of an art collective that had found a home there. We found a Philadelphia Planning historical document from 2021 which presents that the building would be demolished and replaced with new construction (PDF)

Church of Assumption: This one had a lot of media attention almost 10 years ago. The large church on Spring Garden St dates back to 1848 and has ties to two Philadelpia Saints. St John Neumann helped consecrate the church and St Katharine Drexel was baptized there. Plans were to demolish the church for new construction. There was a large outcry against the demolition, and today the property still stands. It seems no one is clear on what the future plans are now.

Hotel ML : Website is not operating (I believe it was a week ago. I assume they are building a new online presence)