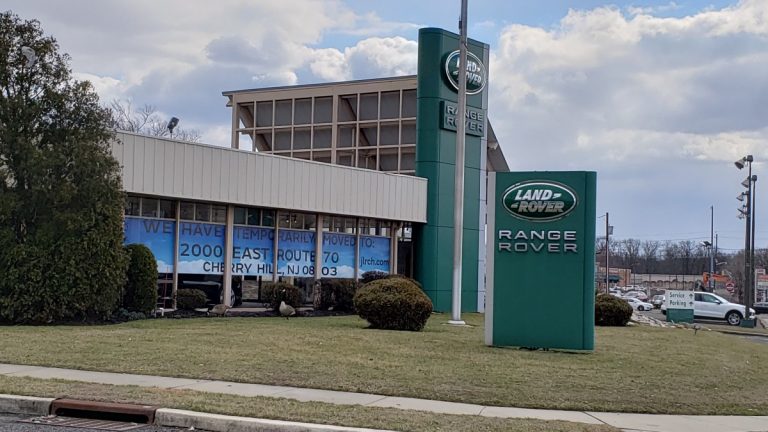 On Thursday March 5th, 2020, the Cherry Hill Zoning Board will hear an application for a new auto dealership in Cherry Hill.  MBJ Associates has submitted an application to the board to build a new ‘Landrover and Jaguar of Cherry Hill’ dealership at 1100 Haddonfield Road in Cherry Hill.  This location was, of course, the site of the old Landrover dealership that temporarily moved to the Jaguar dealership on Route 70.  The move was to be temporary, as plans were submitted back in 2017 to build a new dealership.  Looking at old Zoning Board meeting minutes, it appears that the old plans originally appeared at the Zoning Board on September 7, 2017, but that the applicant asked to postpone the hearing as they wanted to submit a more detailed plan.  The hearing was never rescheduled. The new plans are different from the plans submitted in 2017, most significantly in that the applicant is no longer asking to permanently shut down part of a public street.  The new plans call for a demolition of the current dealership and the building of a new 34,662 square foot dealership, with a 9,395 square foot mezzanine (Lot 1 on the map).  Two homes at 1200 and 1208 Wynwood Avenue would be bulldozed and used as inventory storage for vehicles (Lots 3 and 4) .  Both of these homes are owned by MBJ Associates already, and appear to be abandoned.   The new parking lot on Wynwood Avenue would be right next to a current new vehicle lot and across the street from another, as three other dealerships already store vehicles in that general area. The former South Jersey Women’s Center, also owned by MBJ, would also be bulldozed and used for inventory storage  (Lot 2).

A hearing will be held on March 5 at the Cherry Hill Municipal Building, as the applicant has asked for several variances for their project, for maximum allowable building coverage, maximum allowable impervious coverage, front parking setback, number of signs and a few others.

If the application is granted and the dealership is built, while I have no information on it, I can’t help but wonder what happens to the current Jaguar dealership on Route 70 across from Old Orchard Road.  And while you might think of it as the Jaguar dealership, or maybe if you have a longer memory you think of it as Cherry Hill Classic Cars, it will always be Masson Buick Opel to me. Growing up in Old Orchard in the 70s, I don’t remember a time where there wasn’t a dealership there.  This was long before Dwell, long before the Marketplace (which didn’t add the ‘Tuscany’ until much later), when that area was nothing but row after row of trees.  Masson Buick Opel was run by three generations of the Masson’s, Cherry Hill residents. Originally opened in 1974, I have fond memories of going there with my father to buy a 1981 Buick Electra.  I distinctly remember getting to choose the color of the interior and the floor mats, although I’m sure my father really picked it out and convinced me the idea was mine.  To an 11 year old kid, finding out that Mr Masson lived in Old Orchard made him the second most famous person I knew from my neighborhood, the first being Flyers Head Coach Fred Shero.

The Masson’s sold the dealership to race car driver Tom Hessert and Classic Cars of Cherry Hill in 1989.

Since the new dealership proposed on Haddonfield Road will be a Landrover and Jaguar dealership, will the current dealership across from Old Orchard still be necessary?  Time will tell.