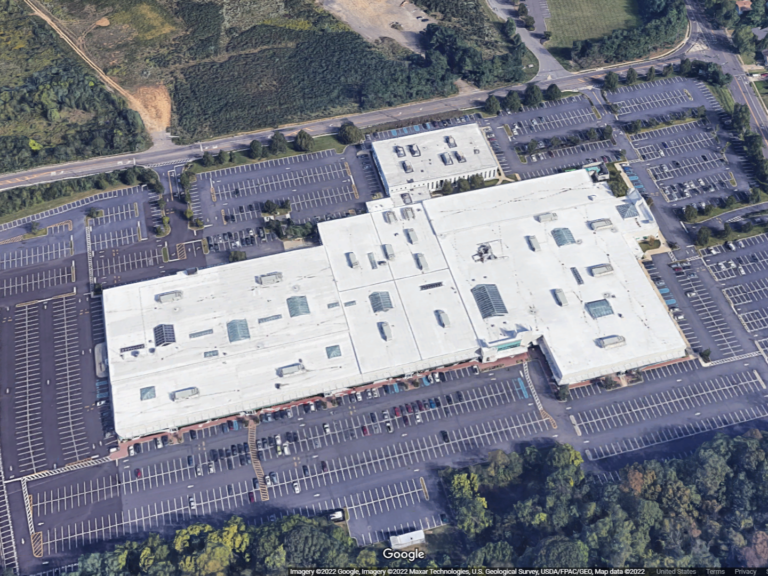 Camden County has leased 154,000 sq ft of space in the Woodcrest Corporate Center in Cherry Hill. A significant portion of that space will be for the Social Services Department which has been looking for a new home for several years.

This is not the traditional 42Freeway post… I think a possible bigger takeaway for readers is that the County previously was planning on moving Social Services into the long closed Bradlees property on the White Horse Pike in Stratford, and those plans are now cancelled.

UPDATE: A statement from Camden County on the Woodcrest Location for Social Services

The Camden County Board of Social Services has identified a new home for a variety of services provided to the residents of the region at the Woodcrest Corporate Center. This new location has excellent parking options, access to several major highways that cut through the county, plenty of public transportation options, and the site sits within a 100 yards of a PATCO Speedline stop. In addition to the PATCO stop, the Board of Social Services has planned for shuttle service to run a circuit from the station to the building.

Furthermore, the Woodcrest Corporate Center is centrally located in the county from a geographical perspective, has a variety of ways to be accessed and will provide renovated office space for about 500 Camden County employees. Furthermore, this location has a synergistic effect with another existing operation we currently have in the complex- the One Stop Resource Center. The integration between both agencies and their new close proximity will make us a more effective organization and benefit clients and residents.

Nevertheless, not every employee will be working out of the new location. The Board of Social Services will be keeping a satellite location in Camden City for continuity and consistency for certain functions in the future. In addition, many of the services that are rendered by the Board are done electronically/virtually now and the operation will schedule between 80 to 100 in-person appointments a day at the future Woodcrest location. That said, we believe this new location will be a significant operational enhancement to critical county services.

Keep scrolling and reading for details on both the Cherry Hill location AND the now cancelled Stratford location.

It seems being located near a Patco station was important to the Count, as the new Woodcrest location sits immediately next to the popular Patco Speedline station there. The previously considered Stratford location across from the Lindenwold Patco Station.

I also located confirmation details in recent County meeting minutes (below), but at this time I could not find an official Camden County press-release, which is surprising. I do have messages in with members of the County.

This is the third proposed location for the Social Services department in recent years as in 2016 they were looking to build a new building on Mt Ephraim Avenue in the Fairview section of Camden (Inquirer), and then a few years later considered the former Bradlees in Stratford.

Those plans for Bradlees would’ve brought 500 workers and 100 visitors daily into the long abandoned property and area (Courier-Post), but Stratford and Mayor Keenan were strongly against the Social Services move to Stratford.

A key reason given by the town was that the large property would become tax-exempt, when the town would prefer an tax paying private owner in an upgraded building.

Stratford has excellent community partners with Jefferson Hospital and Rowan, but those uses are also tax-exempt, and it’s assume Stratford would prefer to have more balance with large properties offering tax revenue.

Honestly, it was a short update from Mayor Keenan at the Stratford website stating the Stratford relocation was cancelled, which then had me looking into where the new location would be.

More details on the reasons Stratford was against the project in their town, as well as additional information on Cherry Hill.

Readers have noted that currently there is activity in the old Bradlees building. Stratford provided us the following update:

The owner of the property at this time has a demo permit to clean out the interior of the old Bradlees space.  The removal of old drywall and dropped ceiling from the prior uses was mainly what was being removed.   At this time there is no known tenant or use for the building.

As mentioned I did confirm the relocation with a Social Services department representative, who stated it will be a full department move. Timeline is unknown at this point.

But I’ll step through the other details I located!

Website Real Estate New Jersey announced in May 2022 that the Camden County had signed a lease for the remainder of the Woodcrest Corporate Center, totaling 154,211 sq ft of space.

While clearly stating Camden County leased the space, no where does it indicate the usage.

It’s a huge win for owner Woodcrest Corporate Center owner Crown Properties who purchased the property just 2 years ago for $25 million when it was property was about half occupied (Philadelphia Business Journal) As mentioned the deal with Camden County will filling out the Corporate Center!

One is for a space planning contract and the other is for 21 new copiers.

The copier leasing contract is interesting because copiers are something that would be moved in at the later stages of getting new offices together. Maybe there the new Social Services offices could be ready sooner than one would expect?

Resolution 220-2022 – Space Planning Services
Mr. Hill presented Resolution 220-2022. The Camden County Board of Social Services has a need for space planning services for the intended move of offices to Woodcrest Corporate Center. The Camden County provided provision of space planning, interior design and associated architectural consulting services for the new Camden County offices at the Woodcrest Corporate Center at a cost of one hundred thousand dollars ($100,000.00)

Stratford Mayor Keenan and Council were opposed to the earlier plans to move the Social Services department to the long closed Bradless building in Stratford.

On the town’s Redevelopment update page, a May 2020 Press release is still posted.

Recently, Mayor Josh Keenan and Stratford Borough Council stood their ground for our residents and rejected an agreement between Brandywine and Camden County government that would have paved the way for the enormous tax-exempt Camden County Social Services Offices to occupy the former Bradlees Department Store site.

Stratford New Jersey Press Release of May 2020, regarding the then plans of the County to take over the Bradlees property

The strongly worded press release goes on to explain the town’s “tireless: efforts working with owner Brandywine to bring a tax paying redevelopment to the site named Stratford Square.

Stratford stated they had a signed agreement with Brandywine for the tax-paying redevelopment which Brandywine “reneged” on.

The full text of the Press Release can be read at the Borough website.

In the most recent update to the “Mayor’s Desk” page at the Stratford Borough website, the Mayor offers this update

As Council announced last month, Camden County has decided not to move their Social Services unit to the old Bradlees building. Council and Brandywine are talking related to the remaining portions of the Stratford Square area trying to find possible interest in the site.

Stratford has several development projects completed and in progress.

South Jersey’s first Tim Horton donut and coffee shop has already opened, and we recently reported on the plans for a Senior Living Facility. There are a few more things in the works and 42Freeway will catch up to them soon!